Located in Worimi Country, Fingal Bay is a small coastal town nestled amidst the picture-perfect Tomaree National Park in Port Stephens, New South Wales. Less than a three-hour drive north of Sydney and an hour past Newcastle, Fingal Bay is only a hop, skip, jump, 12-minute drive away from the larger and slightly more famous township of Nelsons Bay. Originally named “False Bay” due to it often being mistaken as the entrance to Port Stephens harbour that is located just 4.5 kilometres to the north, it wasn’t until 1845 that the name Fingal Bay appeared on a chart drawn by Captain Phillip Parker King to become the official title we know it as today. 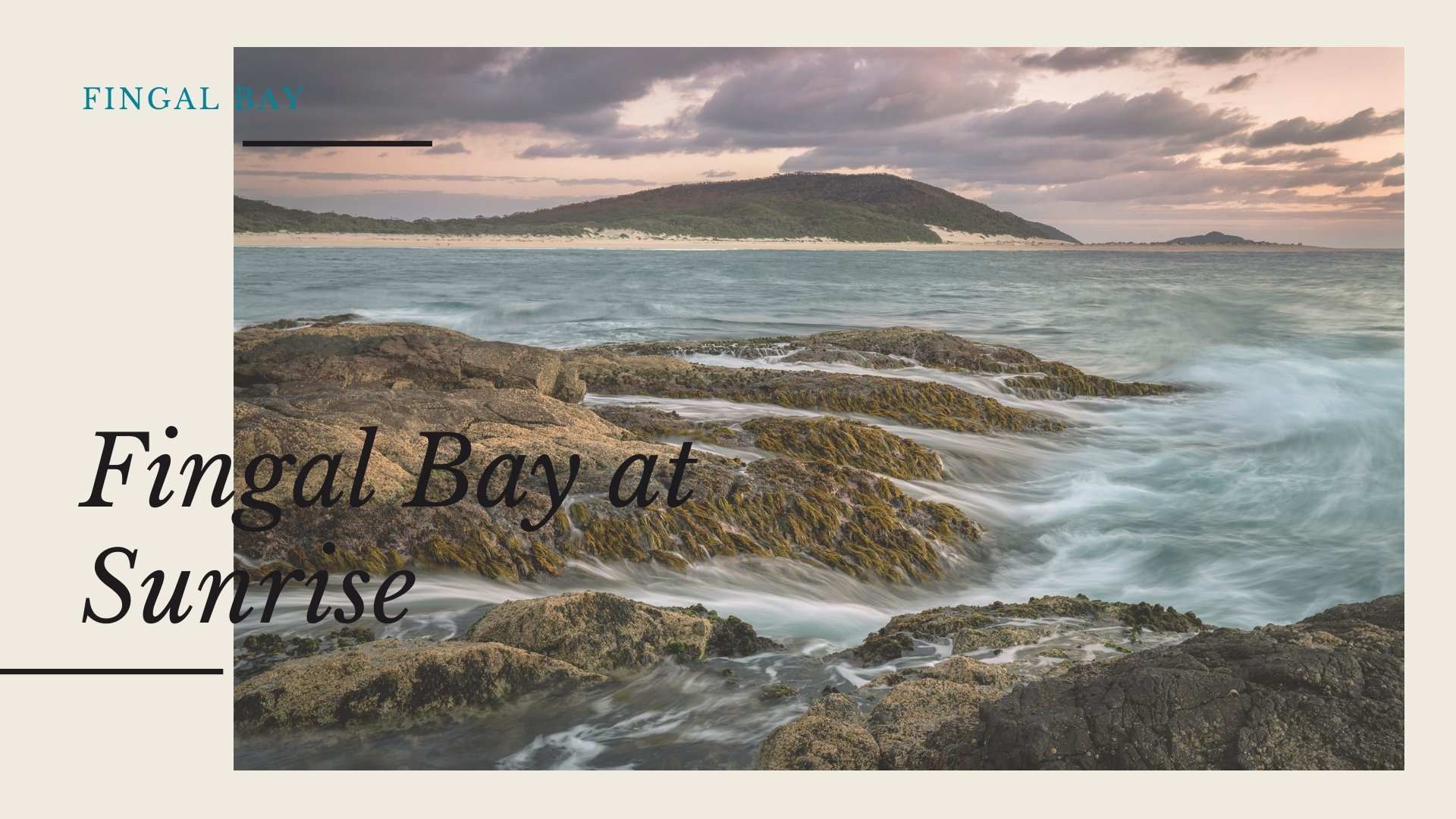 Formally a fisherman’s hideaway that was accessed from Nelsons Bay by a sandy track, the town of Fingal Bay lies hidden amongst the national park bushland and feels like you have stumbled upon a hidden gem a mere hour north of Newcastle. The small township of Fingal Bay is set around the semi-circular, patrolled, pristine, white-sand beach with its protected waters creating the perfect spot for viewing the sunrise or spending the day in the sun with the family. The town is well known for ‘Fingal Island’ (Shark Island) where you will find the Port Stephens Lighthouse and ruins of the former caretaker's cottage, and its infamous connecting sand spit referred to as narrow gut that has claimed over 15 lives. 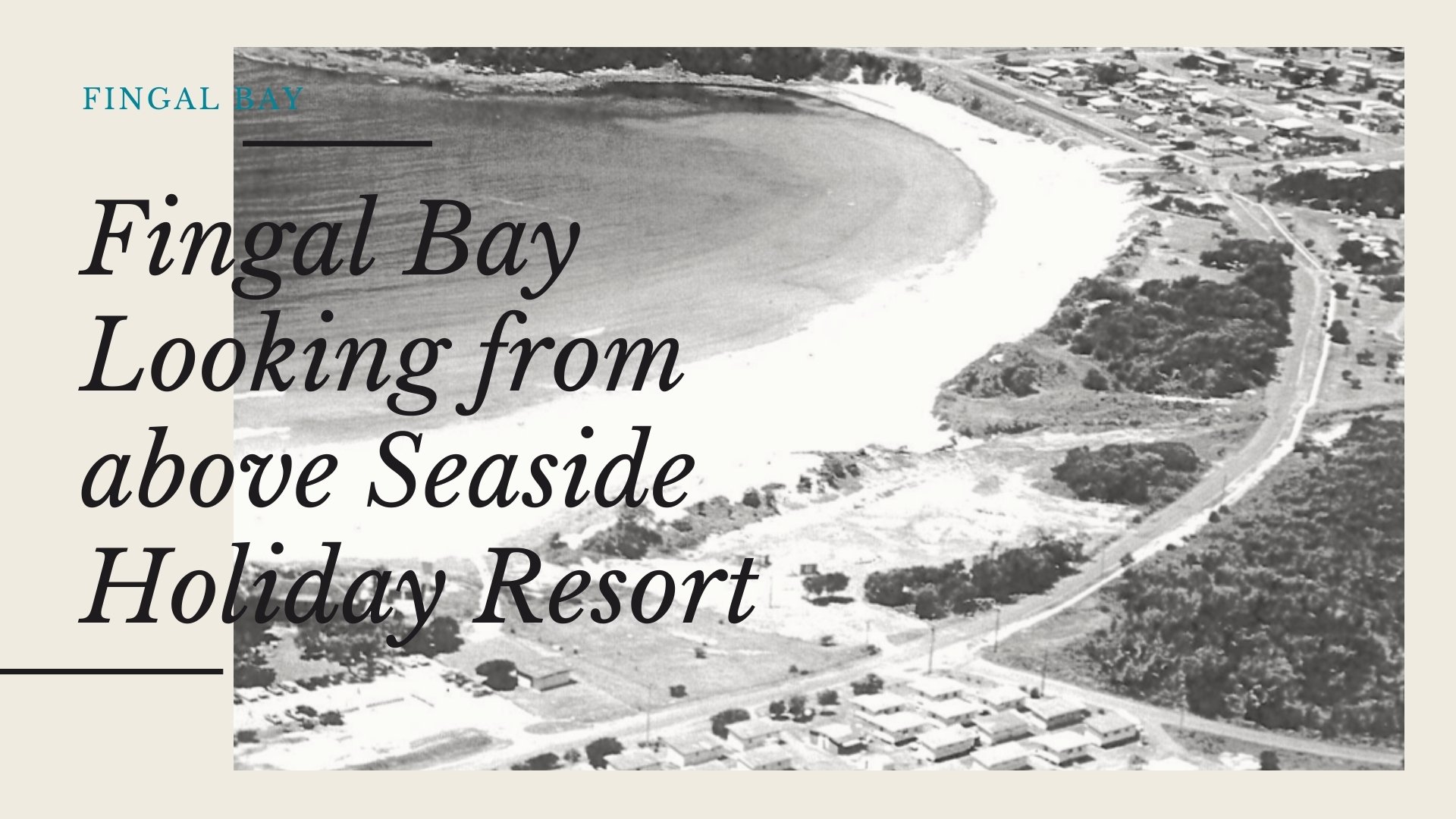 ‘Fingal Island’ was in fact the southern headland to the Port Stephens harbour and was connected to the mainland permanently by a natural land bridge. On the 11th of May in 1770, Captain James Cook whilst sailing past the rocky headland and harbour entrance on his northbound voyage onboard the Endeavour named the southeastern tip ‘Point Stephens’ and the harbour ‘Port Stephens” after Sir Phillip Stephens, the secretary of the British Admiralty.

‘Point Stephens’ is the location of the historic Port Stephens lighthouse that was opened in 1862 after local petitioning since the late 1830s, along with a lightkeepers residence. Also referred to as the ‘outer’ lighthouse (the Port Stephens ‘inner’ lighthouse at Nelsons Bay was later erected in 1872) was only built after the coastline surrounding the entrance to Port Stephens had already claimed 24 ships. The structure was composed of Sydney sandstone and had been designed by Alexander Dawson who was the New South Wales’ Colonel Architect for a brief period from 1855 also having designed the Sydney Observatory and Hornsby Lighthouse during his tenure. 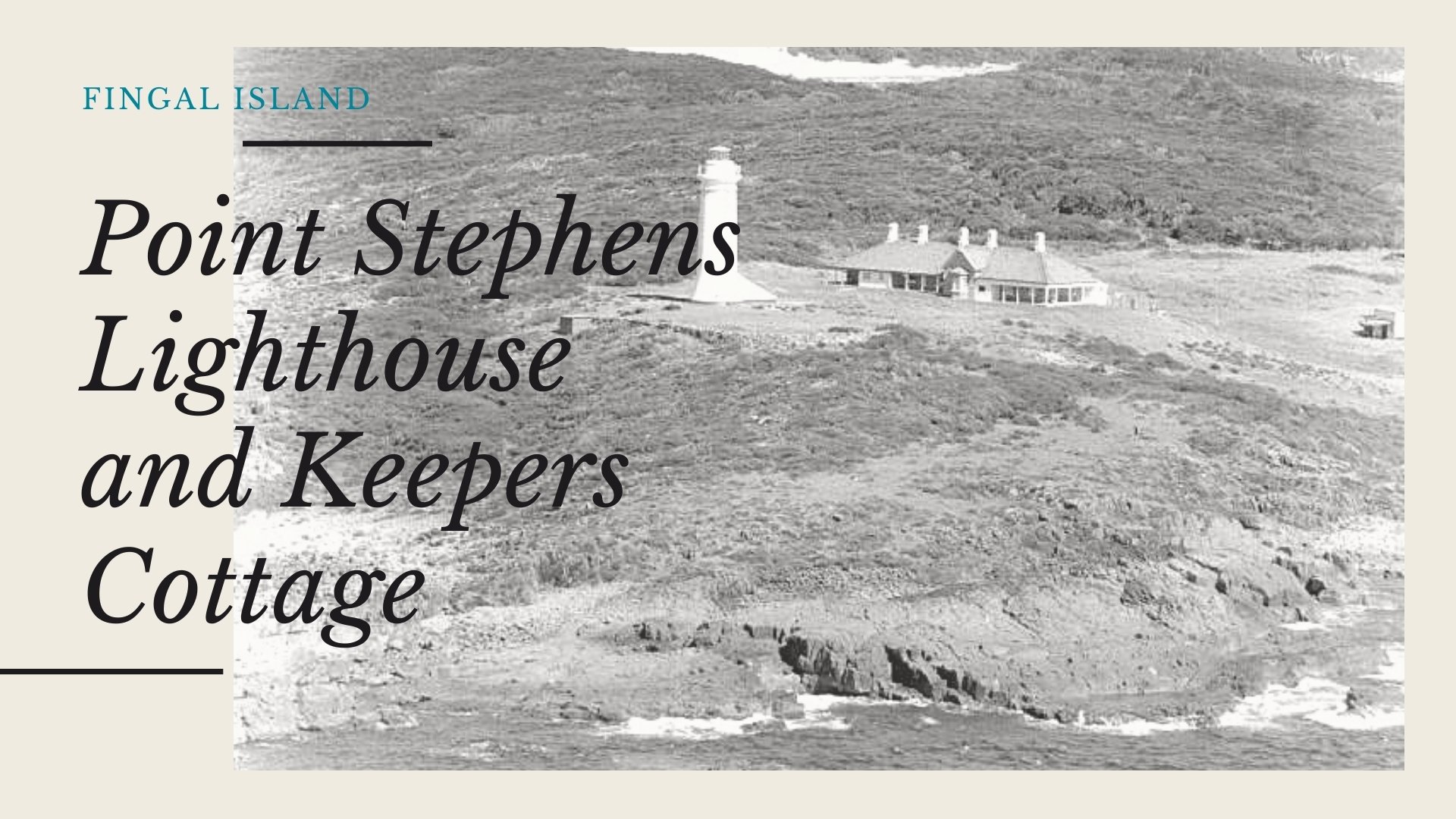 Compared to other lighthouses, life at Fingal Island resembled life on a farm rather than the expected life of hardship experienced elsewhere. The keeper’s families residing on the island had to maintain a two-month food supply even though there was a regular supply boat, a barge called the Bomb Scow, due to often-rough seas. They also exhibited resourcefulness, fishing and cultivating their own gardens of vegetables and fruit trees. After over 111 years of the three lots of keepers and their families manning the lighthouse, in 1973 the lighthouse beacon became automated and today it is powered by solar. 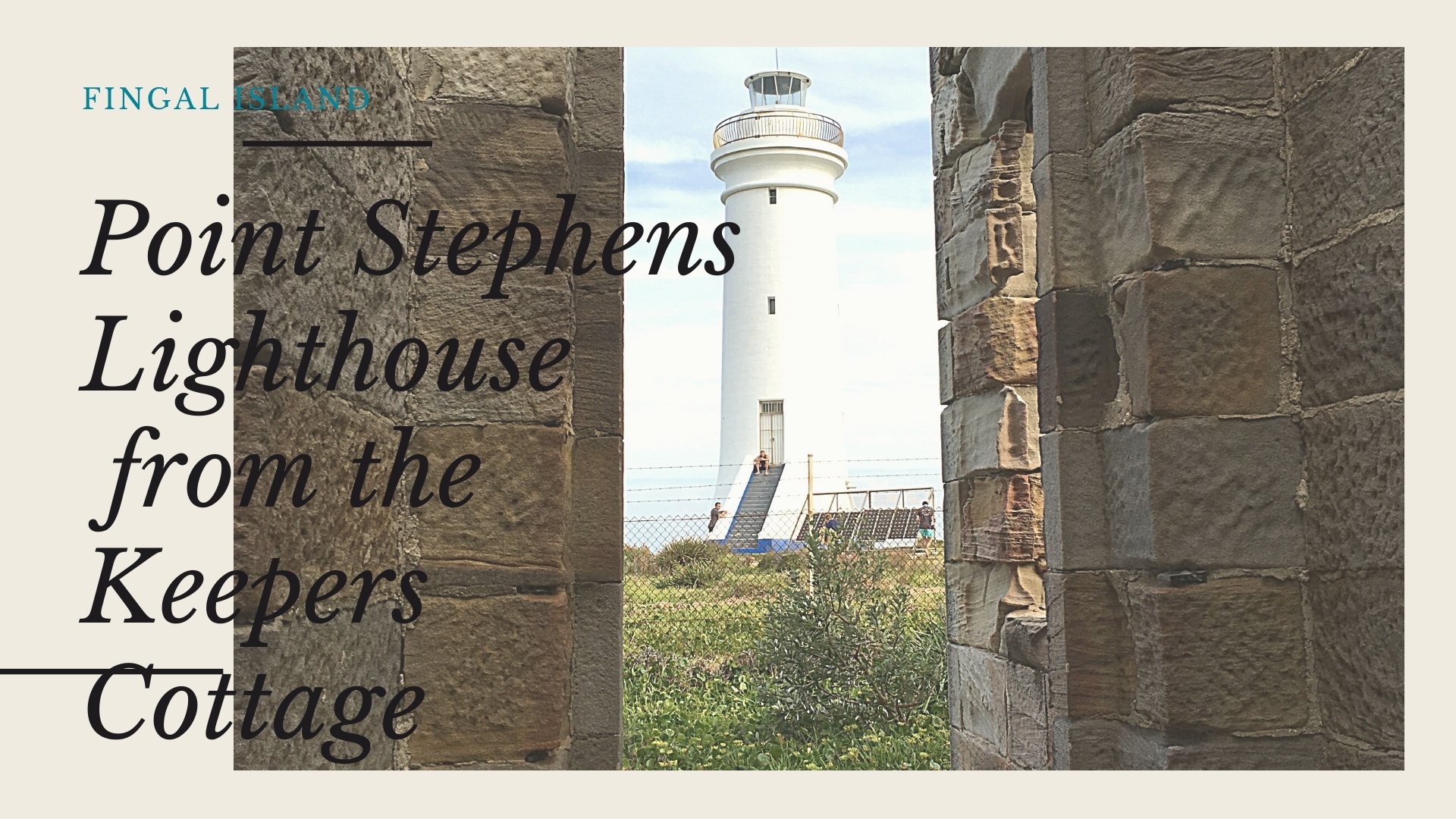 The Point Stephens grounds are no longer tended and have been in a relative state of disarray since their automation. The 1865 keeper’s residence, in a blow for the Fingal Bay community, is now just rubble and ruins after being vandalised and set alight in 1991. The blaze also claimed important lighthouse records that were stored there making it difficult to find accurate accounts of the events that unfolded there.

For anyone with a passion to learn the history of the lighthouse and the families based there, Fingal Bay author and fisherman John ‘Stinker’ Clarke has pieced together many of the forgotten stories in his book The Outer Light that can be purchased in town or found at local libraries.

Point Stephens was originally connected to the mainland via a 180 metre wide, and above storm surge four-metre high vegetation-covered land bridge, until it was destroyed and washed away by the devastating Maitland Gale in 1891 becoming the intermittent sand spit visible today.

Although it has been sometimes accessible at low tide, the two-kilometre journey to the lighthouse via the spit has claimed 15 lives so it is no longer permitted and the only safe way to access the island is by checking the tides and travelling there by kayak or boat. Storms and erosion are constantly impacting and changing the spit, one day it will appear intact, and following a storm, it may be completely gone. The tumultuous, untamed waters only need someone to be attempt the crossing from knee-deep to carry one to their end on one of its fatal currents.

For more information please check with National Parks and ask the locals before attempting the crossing to find the safest way across. 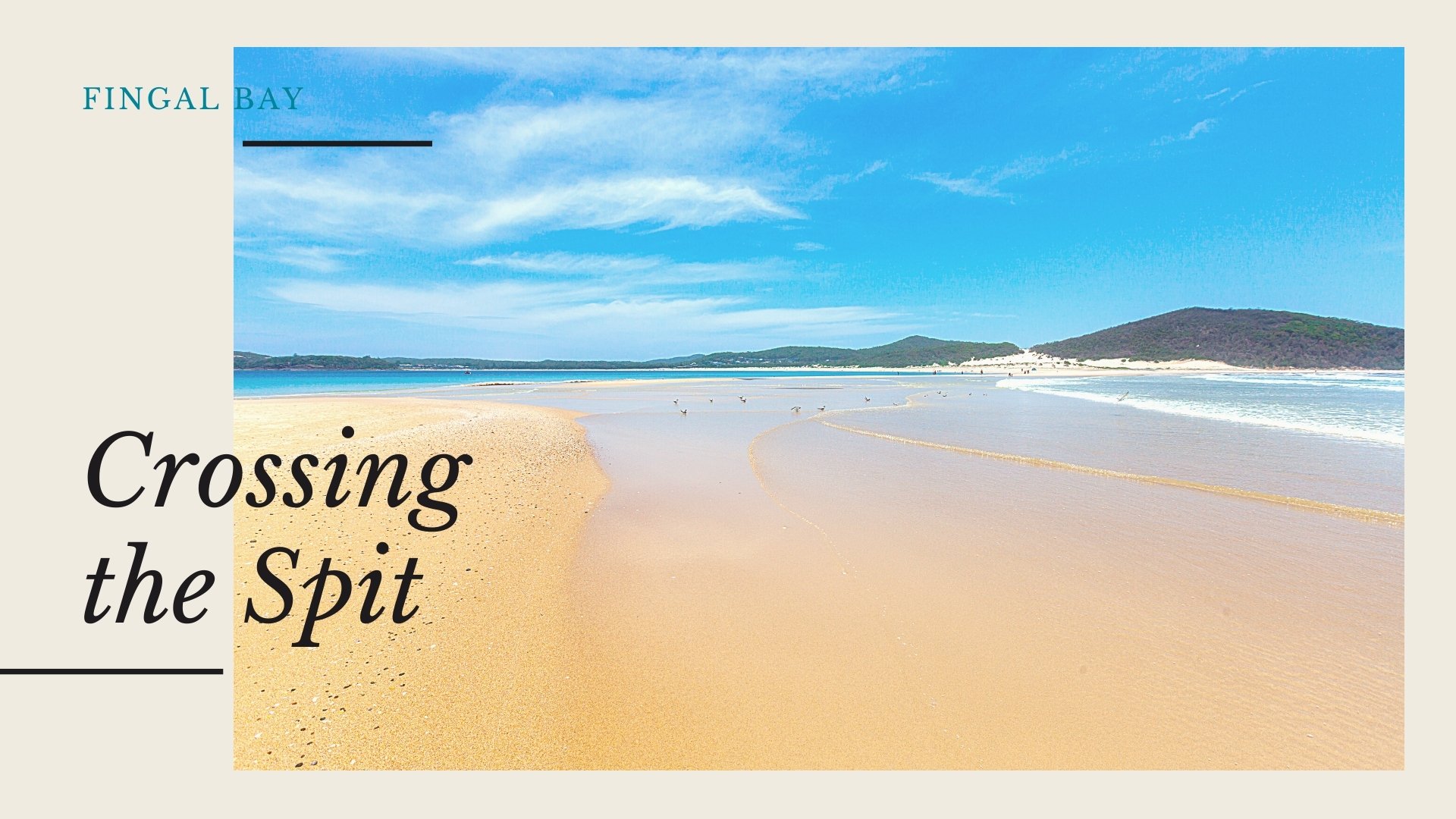 Barry Park, located atop Fingal Bay’s southern headland and offering superb views of Fingal Island and the rolling Pacific Ocean, was named after one of Fingal Bay’s longest residing families who were holidaying in Fingal Bay in 1930 during the great depression in an old tin shack and ended up staying on. The 8.2-hectare park opened in 1995 was named in memory of the Barry’s who were pioneers of the town.

The Worimi people, the traditional owners of the land, were recorded as being hunter-gatherers by nature. Their lands were bound by rivers and extended all the way to Newcastle in the south, Forster in the north, and to the Barrington Tops in the west. The Port Stephens landscape is scattered with important artefacts and locations of cultural significance including campsites, burial sites, canoe trees and middens pre-dating European arrival.

There are middens located in the Fingal Spit area according to the Port Stephens Council, the middens were communal ovens where the Worimi feasted on fish, shellfish, animals and birds, and were constructed from a pit in the ground lined with stones to radiate the heat. The Worimi would wrap their food in green vegetation and bake it slowly in order for it to remain tender under hot coals and stones.

Captain Cook saw smoke rising from Worimi campfires on his Endeavour voyage in 1770, but the first Europeans to settle in Port Stephens were a group of five escaped convicts who sailed from Sydney into the harbour where their boat sunk in 1790 and were seen by the Worimi as reincarnated ancestors, living peacefully amongst them and even taking wives and joining them on their wanderings until their recapture in 1795. William Scott had described the Worimi people in 1873 as being “more prone to laughter than tears, seemingly regarding life as great fun to be enjoyed to the utmost”. By the 1900s there were few Worimi remaining and their culture is now preserved through a collection of Indigenous lands boards and individuals. 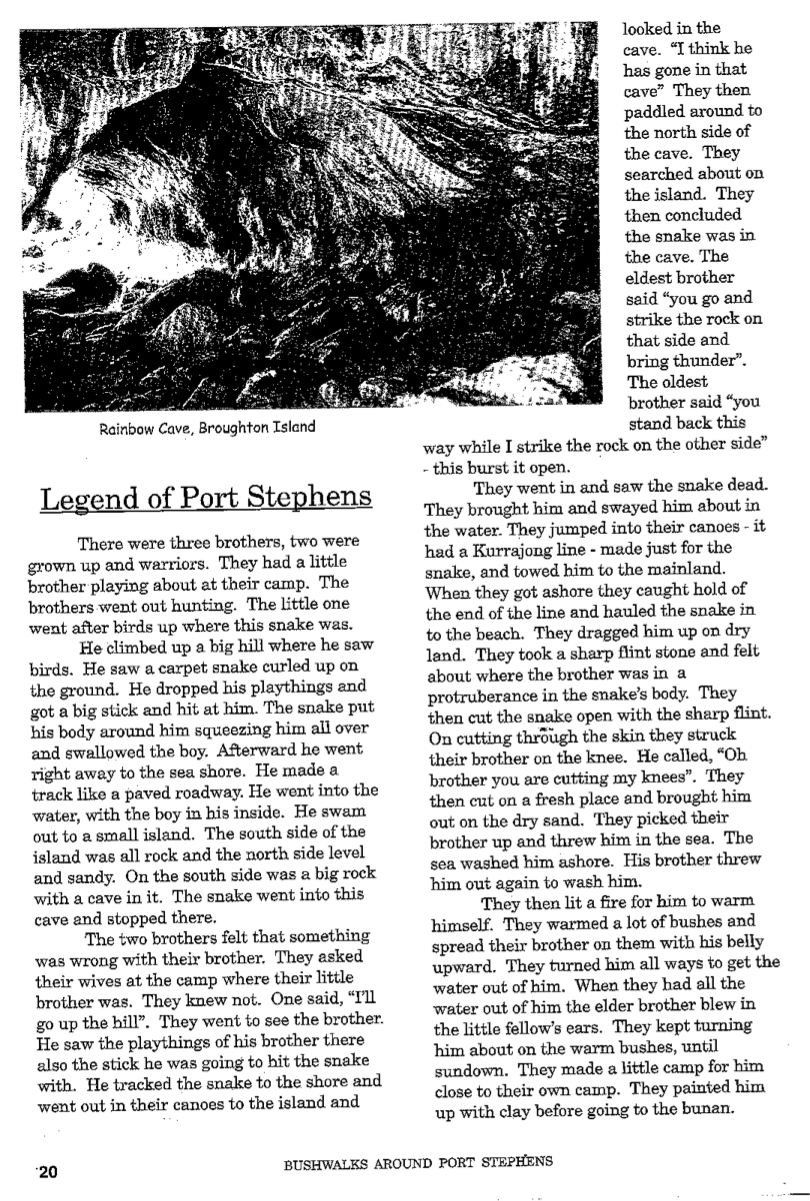 The harbour of Port Stephens was initially thought to be first sailed in 1791 by the Third Fleet convict ship the “Salamander” and charted in 1795 by Charles Grimes who described the harbour waters as shallow and sandy. It wasn’t until the arrival of the HMS Providence later that year where it was discovered that the five escaped convicts from Parramatta had sailed into Port Stephens and been living amongst the Worimi since as early as 1770. In fact, much of Port Stephens’ early history involved numerous escaped Sydney convicts, which led to the founding, in 1820, of a garrison at the location of Soldiers Point.

The Port Stephens area experienced increased development during the 1800s. In 1816 timber cutters began felling the cedar in Port Stephens’ forested areas, as widely occurred up much of the New South Wales coast, with timber and wool being the two major resources regularly shipped south to Sydney. By 1820 Port Stephens had become a popular respite for passing ships and whalers who sourced wood and water from the area, and by 1823, ships began transporting cedar directly to England. During this time, the fishing industry was also established, however, due to the remoteness of Port Stephens, it was impossible to transport fresh produce to larger markets in time before it would spoil. It wasn’t until 1956 and the establishment of the Fisherman’s Co-operative sheds in Nelson Bay, which also had refrigeration.

The soils of Port Stephens were not suited to many agricultural uses due to their poor quality, and it was this reason that it was not developed into a bustling port with large accompanying townships such as the major city and port of Newcastle 45 kilometres to the south-west. Even so, in 1920 the editor of The Daily Observer had published a proposal for Port Stephens to become a capital city of a new state in regional retaliation for the ongoing trend of the time for the government to be Sydney-centric with both their funding and governance, however, this was not to eventuate.

World War II saw The Royal Australian Navy utilise the low populated town of Nelson Bay for the location of an amphibious landing training establishment named the HMAS Assault with more than 20,000 Australian and US troops having trained there. Due to Port Stephens’ proximately to the significant port of Newcastle, and relative remoteness, it was identified as a suitable defence hub for the area. In 1942, Fort Tomaree, heavy battery artillery and barracks for 500, navy and air force personnel, was built part-way up the Tomaree headland, along with an RAAF radar station at the summit. To this day you can view the remaining gun emplacements along the walk at Tomaree Head, and naval relics can even sometimes be discovered on the beaches in the region from their training exercises. 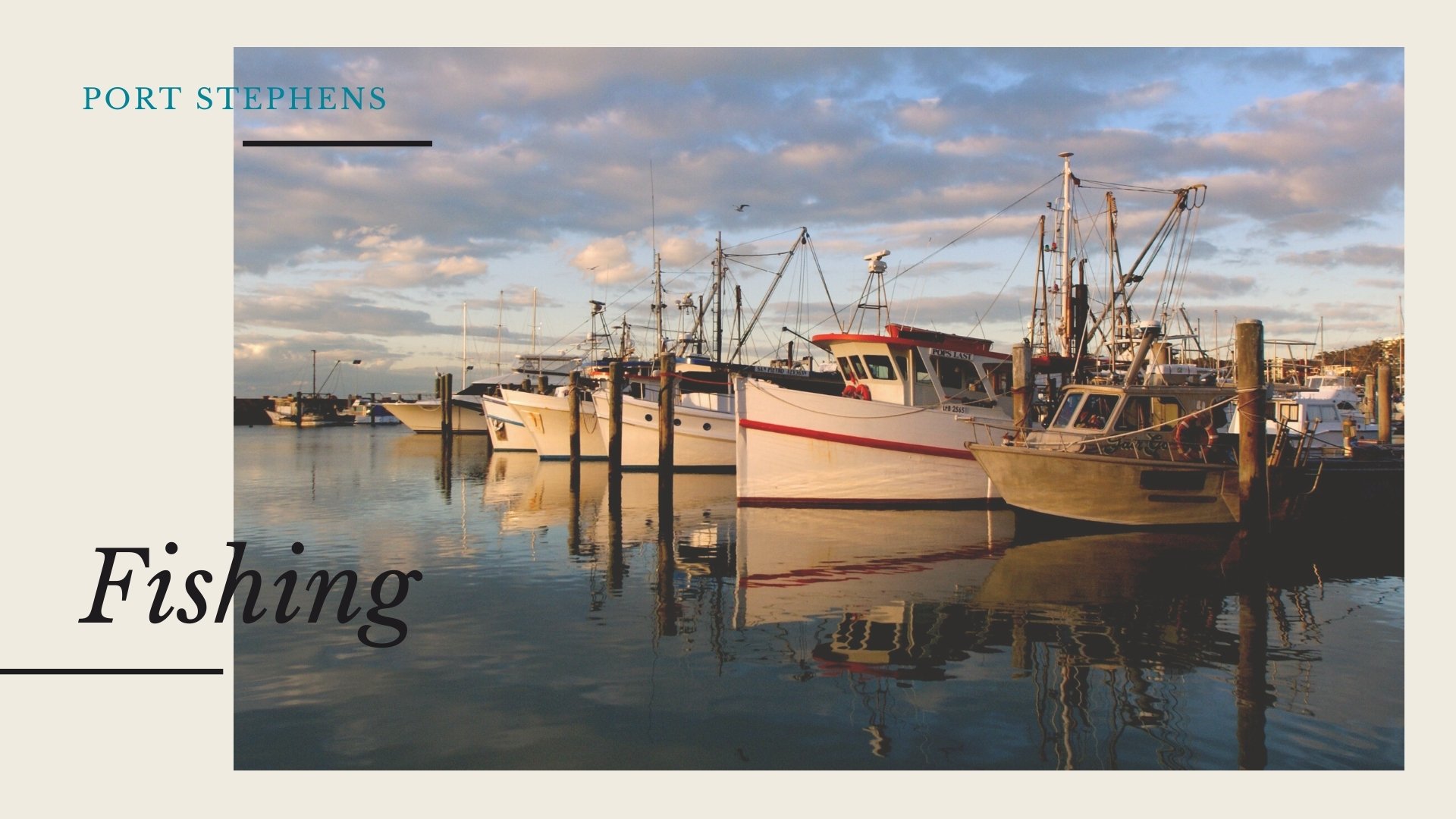 The coastal towns of Port Stephens’ economy are now primarily based on tourism, fishing, mixed farming, dairy, prawning, and is currently Australia’s largest oyster farming area. Fingal Spit was one of the locations used in the well-known advertising campaign “So where the bloody hell are you?” featuring Lara Bingle in 2006 and has been voted one of Australia’s 20 best beaches by Tourism Australia in 2020. 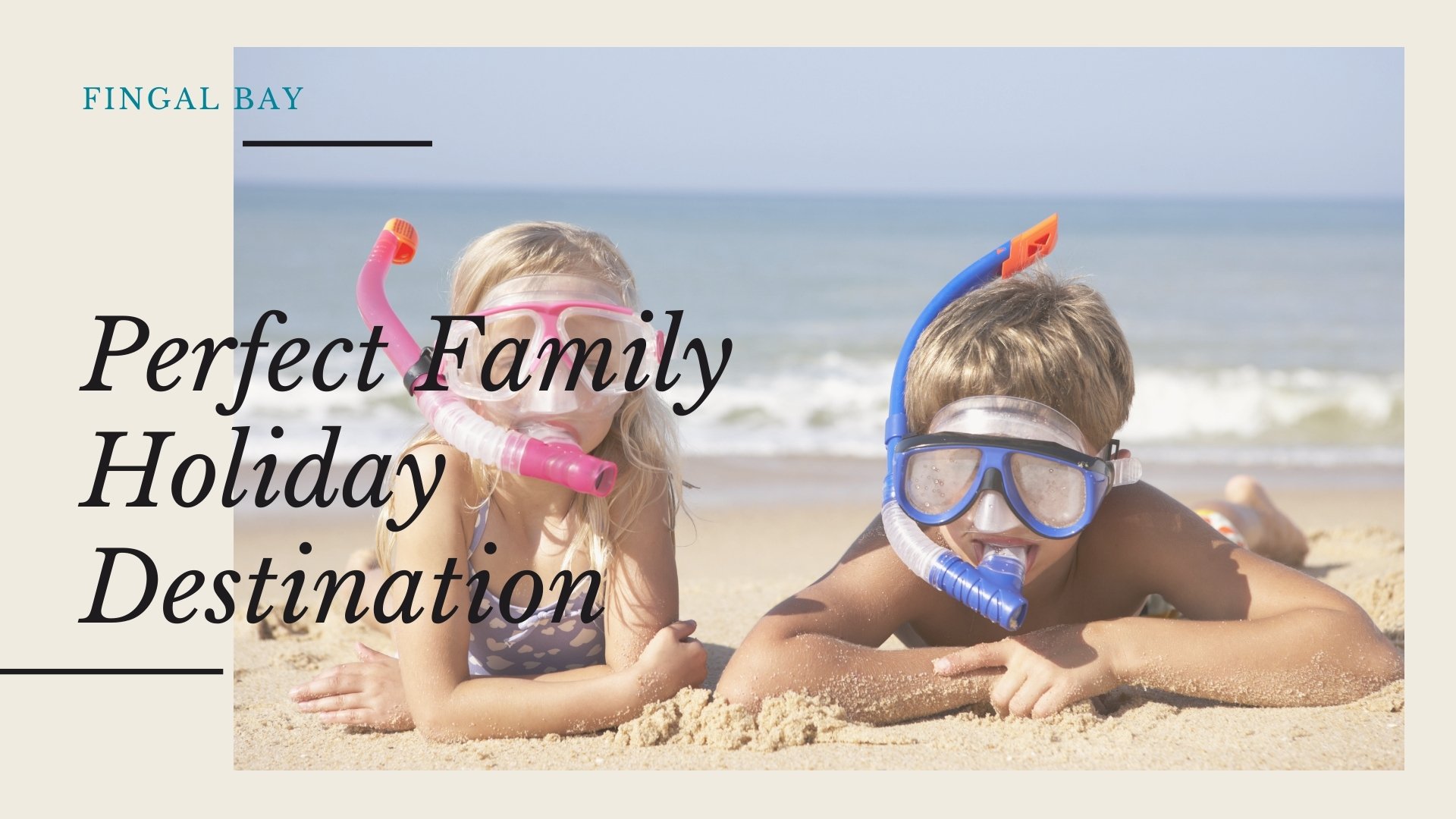 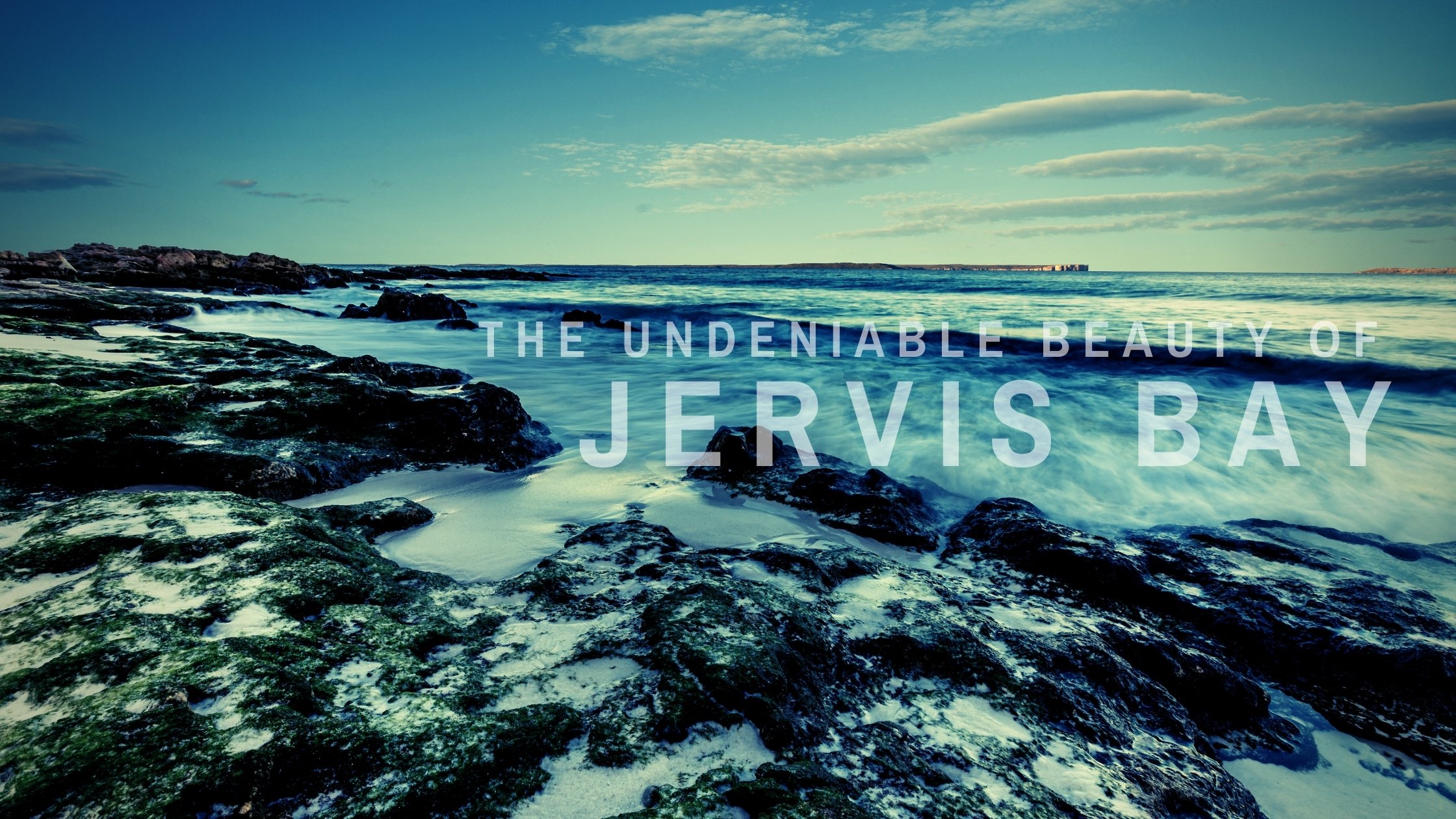 The Undeniable Beauty of Jervis Bay